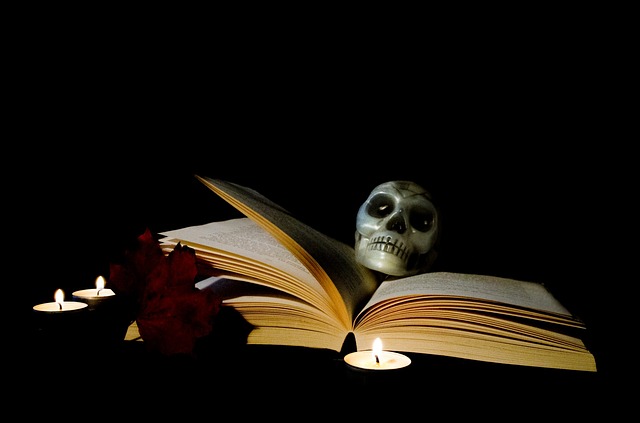 Do you like to read spooky books at Halloween? What sort of spooky books do you prefer? This list of short book reviews includes ghost stories, Gothic and historical fiction, right through to true horror stories.  Hide inside, be scared, be entertained but keep reading.

Richard Papen and his group of intellectual friends, fascinated by old Greek philosophy, are trying to cover up a murder someone they knew committed. When Bunny Corcoran is overwhelmed by the secret, the group eliminates him. This is not only a book about a murder but about what friendships mean and the feeling of loss one experiences when one’s friends decide to break up.

The Secret History is an amazing book that will keep you up until late hours of the night because you will have to find out what happens to Bunny and Richard’s friends. The murder and how the members of the group perceive it, adds an aura of mystery to this already interesting story. Donna Tartt is well known for her craft in describing feelings, states of mind and thoughts, and you will find her signature narration in this book too.

Edie Burchill’s monotone life changes when a letter postdated 50 years ago arrives in the mail. Intrigued by her mother’s reaction, she starts to investigate her past. She finds out that her mother, Meredith, was evicted from London during World War II so the starts her research at the Milderhurst Castle, where Meredith lived during the war. There live three elderly sisters Saffy and Percy, twins, who are taking care of their younger sister Juniper. By befriending the sisters, Eddie discovers the truth about a missing fiancée, a lost love, a crazy author who wrote her favorite book “Mud Man” and the real man who stands behind it.

If you love historical fiction and mysteries with gothic elements, this is the story for you. I loved the scenery and the amazing secondary characters that are the backbone of this novel. Also, the fact that the main mystery is about a book, that Eddie loves, makes The Distant Hours one my favorite stories.

The narrator, a young, 21 year old maid is asked to marriage by the famous and charming Maxim de Winter, the owner of the fabulous Manderley estate. Fascinated to be the woman of such a residence and the wife of a wealthy man, she accepts and moves quickly to his house. But her new life as Maxim’s wife is shadowed by his late wife, Rebecca, who died not long ago.

Rebecca is classic gothic novel that should be read by all who love romance, mystery, suspense and a sinister surroundings. The way Rebecca’s ghost overshadows the narrator’s life is slow and fascinating to watch. Daphne du Maurier created a universe for Rebecca as Maxim built a house. du Maurier treats the reader with a poetic monologue about love, loss and hate.

After his family’s members are murders, a two year old ventures to the graveyard on the hill. Nobody Owens, or Bod, is raised and educated by the inhabitants of the graveyard who are all dead. The story focuses on Bod as he grows up surrounded by supernatural and magic. But the day he lives his home, he discovers that the assassin that killed his family now can trace him and he will murder Bod.

The Graveyard Book is a story about growing up in special circumstances. Bod’s supernatural friends and family are amazing and well developed characters. The setting is colorful and diverse and the characters are quirky and adorable. Neil Gaiman took elements from The Jungle Book and folklore and cooked a fascinating story with a dash of horror. This is the perfect book to read with your children on Halloween.

Carrie, a bullied teenager with an ultra-religious mother has telekinetic powers. But she can’t enjoy or even master her gift because her mother considers it a shameful thing. The invitation to go to prom with one of the popular guys it Carrie’s highlight of high school career. But her classmates have one last prank for her, on this night she has dreamt of.

Stephen King is the master of horror, so you expect Carrie to be gruesome and scary. But this novel brings something more to the table: a bullied teenager who is wronged by everyone around her. This book will give you chills because of the detail the author puts in the scenes.  Be emotionally drained and heartbroken for Carrie who wants to be accepted and to understand her body. Definitely our top spooky book for Halloween.

Lucy Muir’s money problems started after her husband died. So she moves to a cheap Gull Cottage that is rumored to be haunted. Soon after she moves, Lucy finds the rumors to be true, and she befriends the ghost of Daniel Gregg, a former sea captain.  After failed relations with wrong men, the friendship with Gregg develops into something more.

The Ghost and Mrs. Muir is a book perfect for romance lovers who want to read a spooky book on Halloween. There is the spooky paranormal element: the ghost of Daniel Gregg. But this is a beautiful romance novel. This loves story makes you think that everything is possible, even when the odds are not in your favor. Lucy is an amazing protagonist with who you can empathize from the beginning. Gregg is the gentleman all ladies dream of. Their attraction is not rushed; it blossoms as the novel progresses. This book is amazing and gives you hope that you can achieve the impossible.