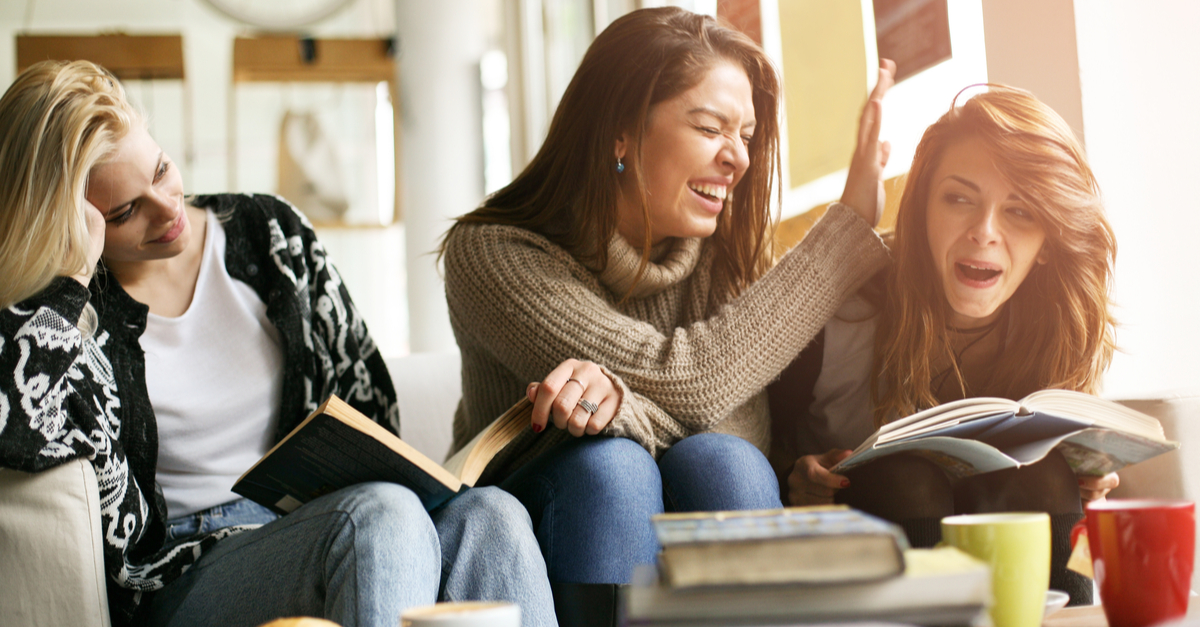 This list has been voted as the best Humor books of 2017 by the GoodReads readership.  We all love a funny story.  Laughter is healing and uplifting.  These funny memoirs or commentaries on life will definitely hit the funny bone.  From fast talking girls, to a self-confessed awkward black boy, our short funny book reviews will help you choose the next book on your reading list.

You might recognize Lauren Graham from Gilmore Girls or from Parenthood, or from… well she’s had a lot of iconic roles in TV shows and movies. But one thing her characters all had in common is the fact that they talked really fast.

For this book Graham takes a breath and tells us what it’s like to be Lorelei Gilmore.  How it has been for her to be part of such an iconic production.  And little anecdotes about the celebrity life. From this book you can expect the same frankness and cheerful tone you get in her TV shows.  Regardless if you are a Gilmore Girls fan or not, this funny funny book is a must read and will have you laughing fast.

2. I Can’t Make This Up: Life Lessons – Kevin Hart and Neil Strauss

Kevin Hart is one of the best comedians and actors today. As you would expect a memoir written by him is hilarious and full of amazing stories. I Can’t Make This Up resembles Kevin Hart: small and full of crazy stories.

He describes his traumatic childhood, writing an ode to his mother.  Kevin talks about the difficulties he encountered as an actor of color in the movie industry and how he became a comedian. This is the story of a dream come true. But even though he talks about difficult subjects, he never forgets to do what he does best: make people laugh, regardless of the subject discussed.  Highly rated even tho it didnt win the 2017 Humor Award.

Unqualified is a bizarre book. It is part memoir, and part advice on how to find your true love. It is full of hilarious stories and real advice. If you listen to her podcast, “Anna Faris is Unqualified”, you might be familiar with her witty and funny remarks on life. But if you have only seen her in movies, you will find this book surprisingly light, true and down to earth. Also, if you ever wondered how life is with Chris Pratt, you might just find the answer here. Unqualified is a best seller and was shortlisted for Goodreads’ Best Humor Award.

4. We Are Never Meeting In Real Life – Samantha Irby

In We Are Never Meeting in Real Life Samantha Irby describes  through a variety of essays, what it’s like to be a young woman today. From late nights spent in front of the TV, to dates which go horribly wrong.  Friendships, to the inability of this generation to be a proper adult, as our parents have thought us.

You can find every struggle a millennial has in this amazing book. Samantha Irby talks about every problem she encounters with wit and humor.  Be sure to check  out this very funny book when you need something to cheer you up.

5. This Is Just My Face: Try Not to Stare – Gabourey Sidibe

Gabourey Sidibe didn’t have the best life by many standards, before staring in the 2009 movie Precious. Her father was polygamous and her mother had to sing in the subway in order to support her children. Gabby’s first job wasn’t as a retail worker or in a kitchen, as it is for most, but as a phone sex talker. But her unconventional upbringing didn’t cause her to lose her sense of humor.

This Is Just My Face is a humorous book, written in a conversational style. By the end of the book you will feel like you have spent the time with a dear friend, laughing and yes maybe a few tissues.

6. The Daily Show: An Oral History as Told by Jon Stewart, the Correspondents, Staff and Guests – Chris Smith

Before Trevor Noah took over, Jon Stewart and his companions made TV history from behind the desk of The Daily Show. But as the Jon Stewart era ended, with 23 Emmys under its belt, the cast and crew of the TV show shared their stories about the best times they had with the show.

You will learn more about the way the talk show was made. And because The Daily Show is known for the satire, you will definitely be left with a smile on your face. The Daily Show: An Oral History is an hilarious read that proves you can treat all problems better, regardless of their gravity, with humor and wit.

Have you wondered how life was for David Sedaris? How he became the funny author everybody loves? The Theft of Finding is his diary, a book that took almost 40 years to write.

The book is a funny take on everyday life, and you can expect to laugh out loud from time to time. So take care reading on public transport.

After reading Sedaris’ book you will feel like you are following a friend who talks about his views on the world along with simple actions. Like eating his favorite kind of pancakes. This Best Seller was shortlisted for Best Humor on Goodreads, so you know this is a popular, funny book you must read.

8. Believe Me: A Memoir of Love, Death, and Jazz Chickens – Eddie Izzard

Eddie Izzard is a comedian, an actor and now a writer. You would expect a tumultuous life history from the man who tells jokes dressed as a woman.  Especially when the games he plays with audiences are, among others, “Cake or Death”, “Death Star Canteen” or “Do You Have a Flag”.

Despite this, Izzard takes writing this book seriously. He speaks about the hard times he had coping with his mother’s death.  The hardship of being a street performer and what drove him to create his act. But best selling funny book Believe Me is written by a British comedian so you will find this a surreal and stream-of-consciousness type of humor.

9. One Day This Will Matter – Scaachi Koul

This collection of essays is written from an Indian immigrant’s perspective. One who feels like she doesn’t fit perfectly in any of the cultures she is associated with. With sharp humor, Koul talks about how she doesn’t belong in an Indian wedding yet in US she is considered a woman of color.

The author is a keen cultural observer. But rather than pitting herself against the shortcomings she has to deal with in her life, she treats everything with humor and wit.

The Awkward Thoughts of W. Kamau Bell – surely the book with the longest title – was another semifinalist of the Goodreads Choice Awards 2017 for the category Best Humor. Kamau Bell is a heterosexual man of color.  From this perspective, Bell believes that woman’s problems, gay and racial issues should be treated together. That they are all essentially oppression by the patriarchal society.

In this book Bell talks about politics, his upbringing, sexuality and being a nerdy black comedian. The Awkward Thoughts of W. Kamau Bell is actually amazingly funny.  Everyone who wants to be up-to-date with the political and social movements, and also needs some laughs should read this funny book.

This was the shortlist voted for Best Humor Book in 2017.  Read at least one for a good laugh.