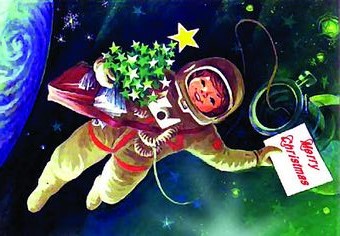 Continued on from our last post we finish reviewing the best ever comedy sci fi novels.

Laughter is healing.  Laughter is relaxing. Laughter lowers your blood pressure.  Laugh out loud with these funny novels.

Give the gift of laughter this Christmas with a good book (or two) from the rest of our list.

Would you leave Heaven and go through Hell to find your find your beloved? Don’t assume what Heinlein’s novel is about because of the biblical title; it is more than a Sci-Fi twist on the Book of Job. Sure, the plot is based on its source of inspiration, where a man made a wager with his Creator and was put through a series of trials. But what we have here is a character-driven story of personal transformation and lessons learned.

In Scalzi’s novel, the Redshirts refer to crew members abroad a flagship whose mission is predetermined by a Narrative. Fans of the TV series, Star Trek will find the premise familiar. That does not mean the novel is just a knockoff of the highly acclaimed TV show. The novel is made up of the principle story, followed by the three codas – short stories focused on the minor characters, told in first, second and third-person, respectively. Overall, the plot is uncomplicated, filled with sardonic wit, and touches lightly on some serious themes.

The plot and characters of each Discworld book can stand on their own, which makes reading them in order not really necessary. Equal Rites is the third book in the series, but could very well work as an introductory book. It is very funny, has better characterization and more depth than the two that came before it. The plot may be a little slow in places, but it is still a thoroughly enjoyable adventure with a satisfying conclusion.

9. Bored of the Rings: A Parody – The Harvard Lampoon

As a parody, this book has unfortunately not aged perfectly, since it contains many pop culture references relevant in the late 60s to the early 70s. Some of its humor may be considered irrelevant or even inappropriate today. However older fans of Tolkien’s iconic fantasy novels are likely to find Bored of the Rings very funny. For true-blue Tolkien fans though, this book is a worthwhile read, even if it is just for the sake of nostalgia, just keep in mind the era which it was first published.

There are currently over 20 Xanth novels, all featuring stories of heroic characters with magical abilities that are set in the fantasy land of Xanth – a clever allusion to Florida. What makes the Xanth novels stand out from your typical fantasy is Anthony’s witty use of puns and innuendos in his writings. A Spell for Chameleon is the first, and considered by many to be the best of the pun-filled series. The plot is solidly developed and worth reading while one enjoys the humor from its smart writing.